';
School of Data Science
15 Data Visualizations That Will Blow Your Mind

If a picture is worth a thousand words, a data visualization is worth at least a million.

One of the most impactful ways data analysts and scientists can communicate their findings is through the increasingly popular media of data visualizations. Entire websites, podcasts, and Twitter feeds are devoted to sharing these rich, immersive data-driven experiences. Infographics these are not: data visualizations manipulate complex pools of data to visually display the data’s patterns, trends, and correlations.

As inspiration for your own work with data, check out these 15 data visualizations that will wow you. Taken together, this roundup is an at-a-glance representation of the range of uses data analysis has, from pop culture to public good. As Erik Berger, a senior web technology manager who’s been working in data analysis for 11 years, puts it, “There are more public sources to find data than ever before. Everything from voting patterns to weather data is available to be interpreted. With the rise of of social media, you can even do things like compare the mood of Twitter to the stock market to make predictions. Even professional sports teams are hiring data analysts to help win.”

The best data visualizations are storytelling tools that spark discussion and elicit calls to action. Consider the gauntlet thrown—see if you can do even better than these.

This interactive graph, built using a database from the Union of Concerned Scientists, displays the trajectories of the 1,300 active satellites orbiting the Earth as you read this. Each satellite is represented by a circular icon, color-coded by country and sized according to launch mass. Scroll through the visualization to explore each satellite’s path, individually and in aggregate. You’ll also learn what kinds of satellites provide broadband Internet, GPS, and Sirius XM. 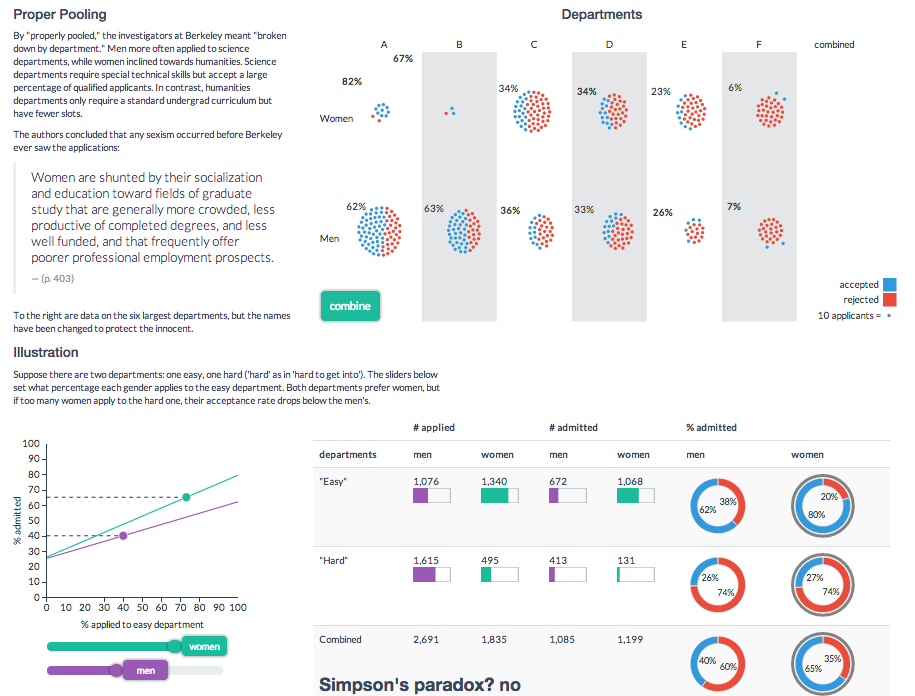 The Visualizing Urban Data Idealab (VUDlab) out of the University of California-Berkeley put together this visual look at data that disproves the claim in a 1973 suit that charged the school with sex discrimination. Though the graduate schools had accepted 44% of male applicants but only 35% of female applicants, researchers later uncovered that if the data were properly pooled, there was actually a small but statistically significant bias in favor of women. That’s called a Simpson’s Paradox. The interactive graphs in the data visualization let you combine and separate different segments of the data to see what exactly went down back in 1973.

This classic lithograph dates back to 1869, displaying the number of men in Napoleon’s 1812 Russian army, their movements, and the temperatures they encountered along their way. It’s been called one of the “best statistical drawings ever created.” The work is an important reminder that the fundamentals of data visualization lie in a nuanced understanding of the many dimensions of data. Tools like D3.js and HTML are no good without a firm grasp of your dataset and sharp communication skills. 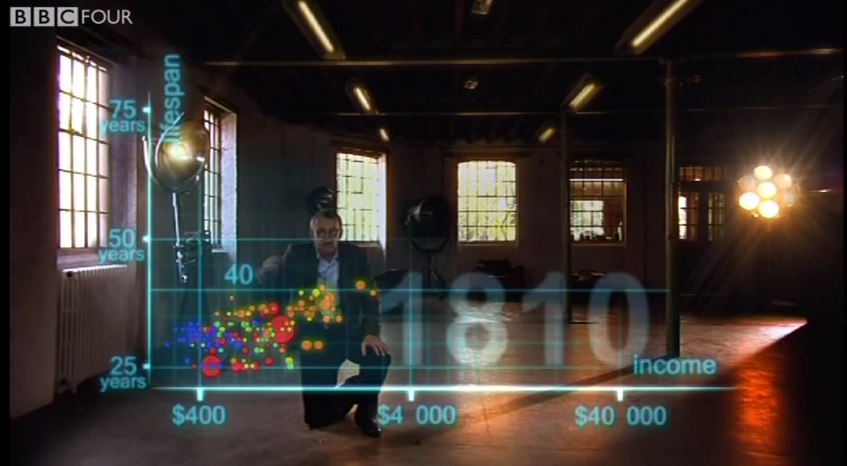 Global health data expert Hans Rosling’s famous statistical documentary The Joy of Stats aired on BBC in 2010, but it’s still turning heads. One segment in particular is pretty mind-blowing. In “200 Countries, 200 Years, 4 Minutes,” Rosling uses augmented reality to explore public health data in 200 countries over 200 years using 120,000 numbers, in just four minutes. His work plots life expectancy against income for every country since 1810, pointing to a closing gap between Western and non-Western countries. Check out the full video clip here. 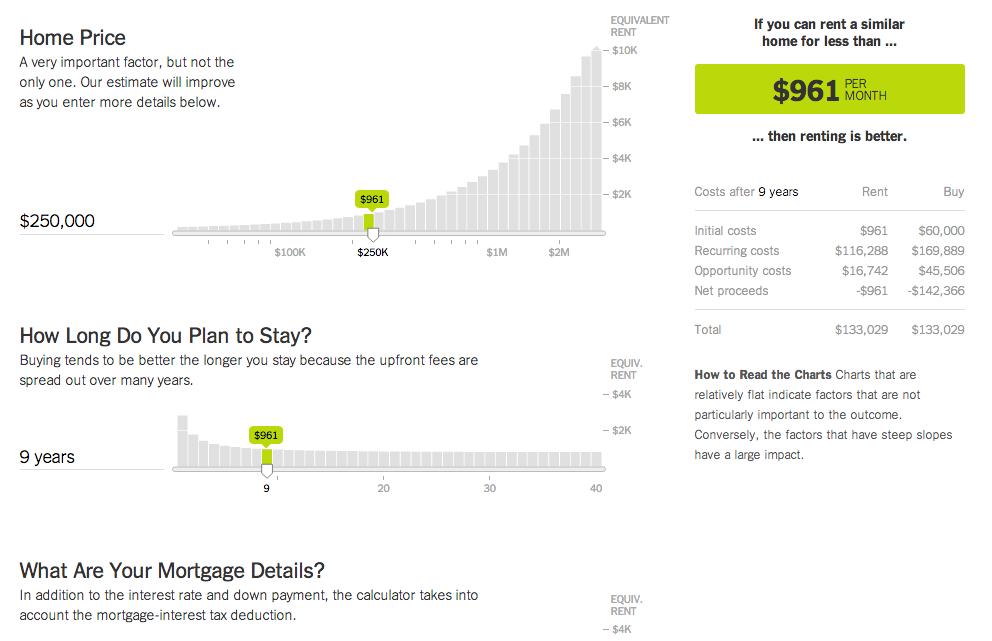 Mike Bostock, New York Times graphics department editor and inventor of D3.js, built a complex interactive data calculator that offers a cost/benefit analysis for prospective homebuyers. Along with his colleagues Shan Charter and Archie Tse, Bostock tapped into everything from home price and mortgage-interest tax deduction to property tax rate and inflation to help you determine whether to rent or buy a home. 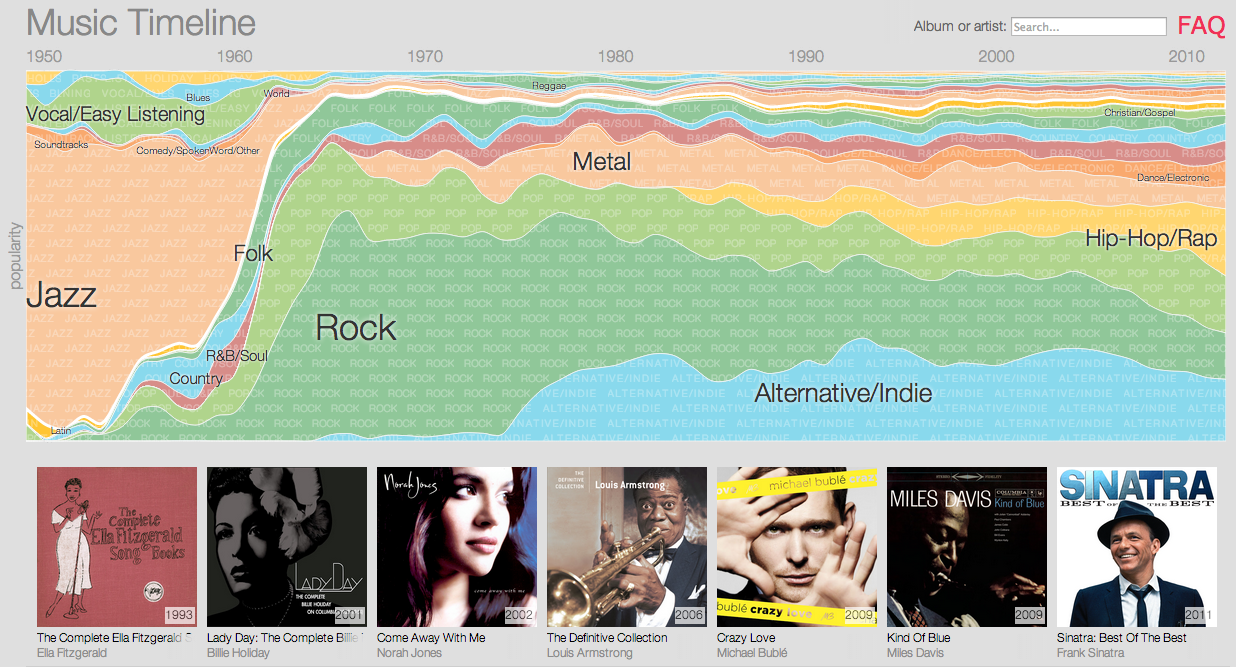 Google’s Music Timeline illustrates a variety of music genres waxing and waning in popularity from 2010 to present day, based on how many Google Play Music users have an artist or album in their library, and other data such as album release dates. Each stripe on the graph represents a genre, from reggae or blues to folk and soul. Each stripe’s thickness correlates with the popularity of music released in a given year in that genre. All the stripes are clickable, so you can dive deeper into any genre to explore subgenres.

7. State of the Union 2014 Minute by Minute on Twitter 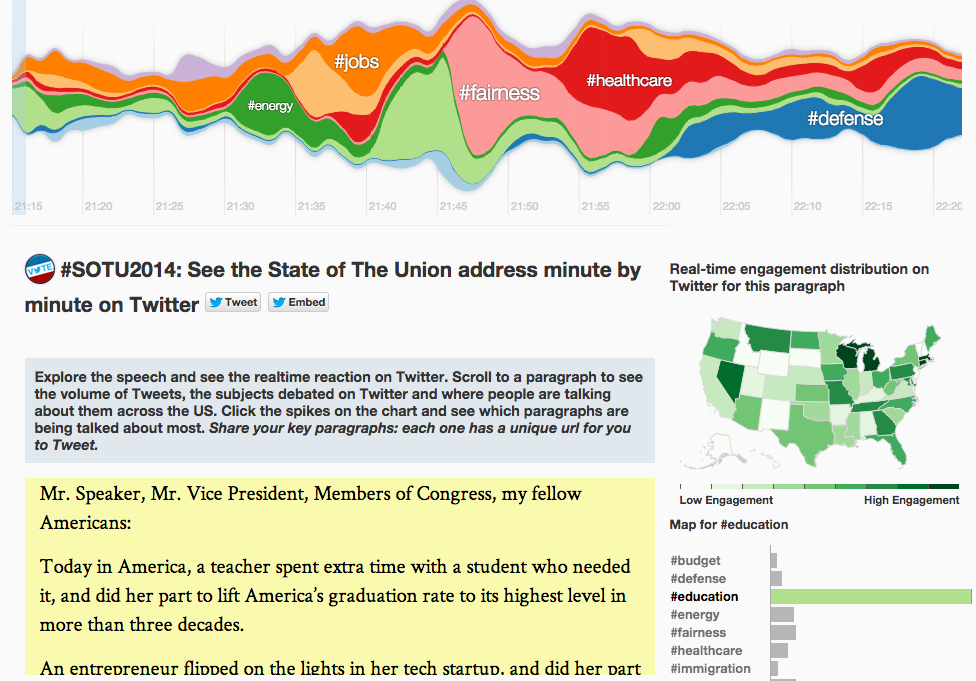 Twitter’s firehose of data provides a rich, robust pool from which data analysts and scientists can pull to analyze real-time reactions to current events. To consider one example, Twitter’s data team assembled an impressive interactive data hub that depicts how Twitter users across the globe reacted to each paragraph of President Obama’s 2014 State of the Union address. You can slice and dice the data by topic hashtag (for example, #budget, #defense, or #education) and state. Pretty powerful. 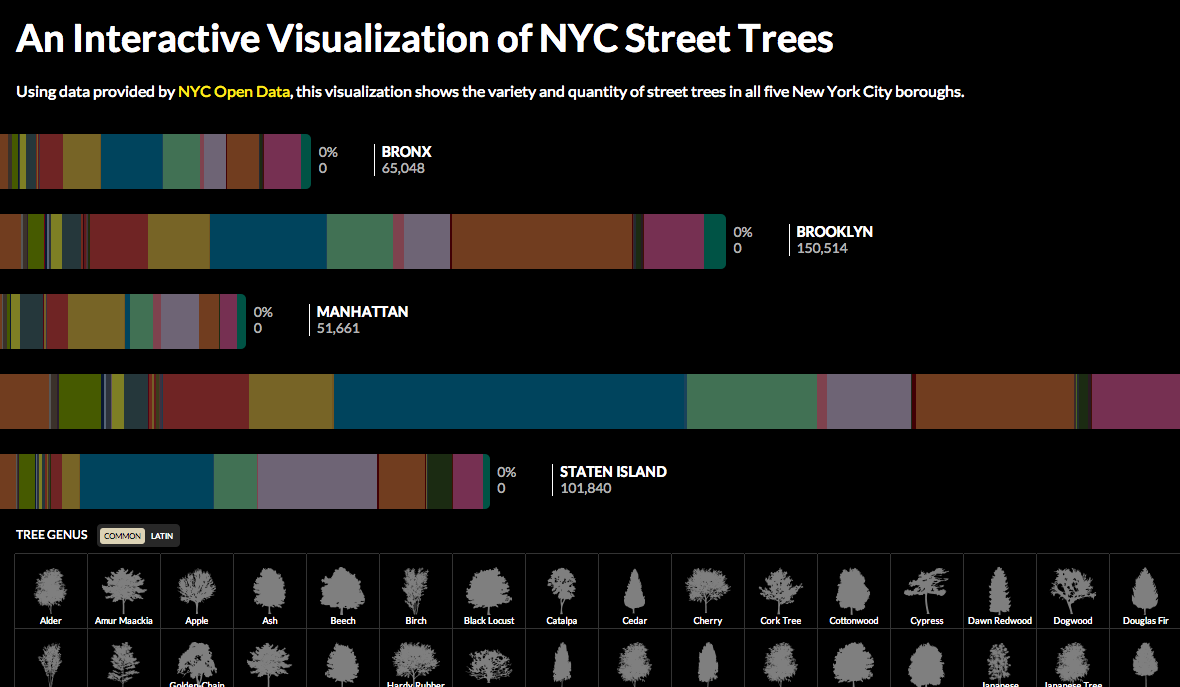 Using data from NYC Open Data, this interactive visualization shows the variety and quantity of street trees planted across the five New York City boroughs. Species are color-coded and cross-referenced by borough. The project uncovers some surprising findings, such as the fact that Queens is home to almost twice as many trees as Brooklyn (A Tree Grows in Brooklyn aside). 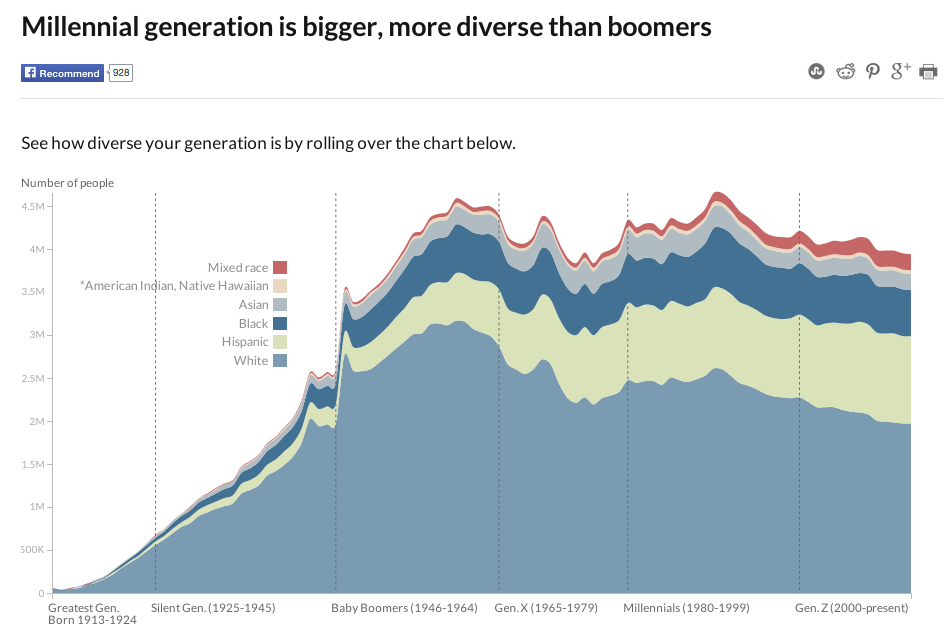 CNNMoney’s interactive chart showing the size and diversity of the millennial generation compared to baby boomers was built using U.S. Census Data. It turns dry numbers into an intriguing story, illustrating the racial makeup of different age groups from 1913 to present. Move your mouse over the graph to explore the stats of each year. 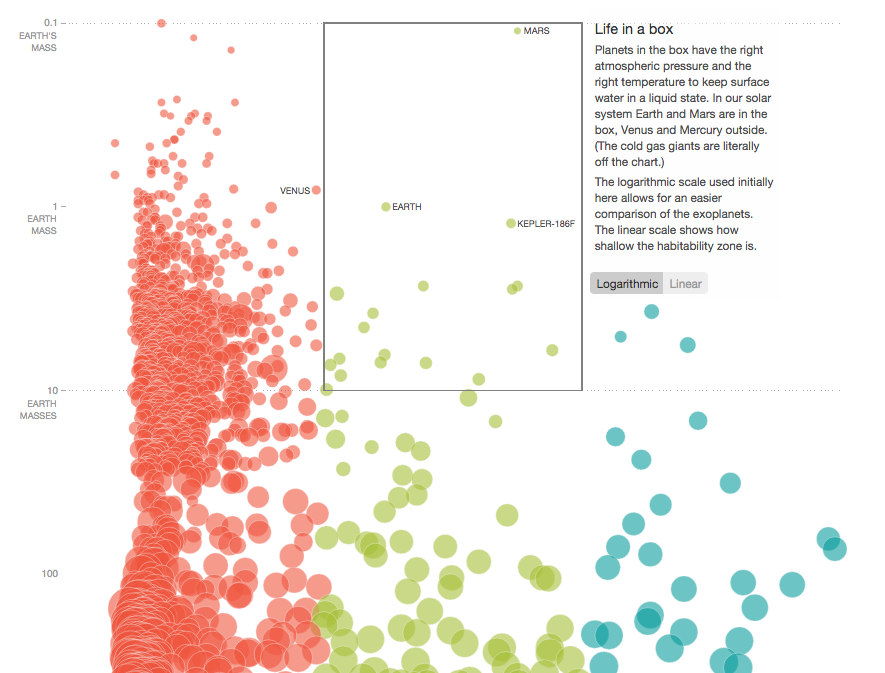 Do you believe in extraterrestrial life? You might after checking out this National Geographic data visualization, which calculates what planets across our solar system and beyond have just the right conditions (hence the Goldilocks reference) to support life. Using data from the Planetary Habitability Laboratory at the University of Puerto Rico, the interactive graph plots planetary mass, atmospheric pressure, and temperature to determine what exoplanets might be home, or have been home at one point, to living beings. 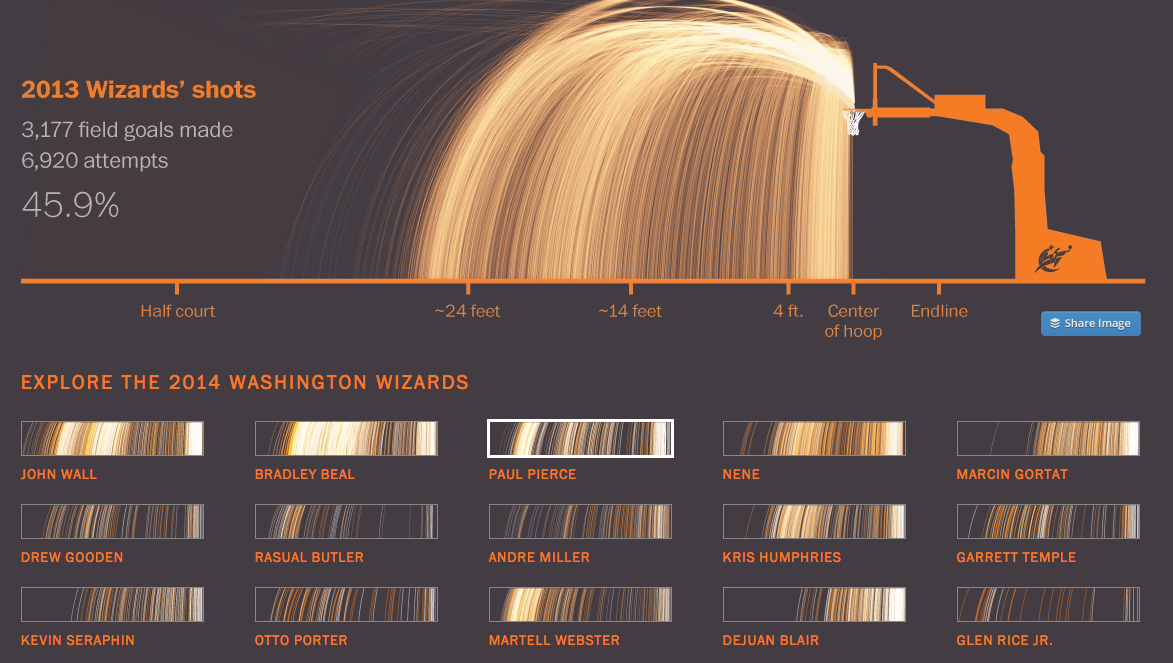 This detailed data visualization demonstrates D.C.’s basketball team’s shooting success during the 2013 season. Using stats released by the NBA, the visualization lets you examine data for each of 15 players. See how successful each person was at a variety of types of shots from a range of spots on the court, compared with others in the league. 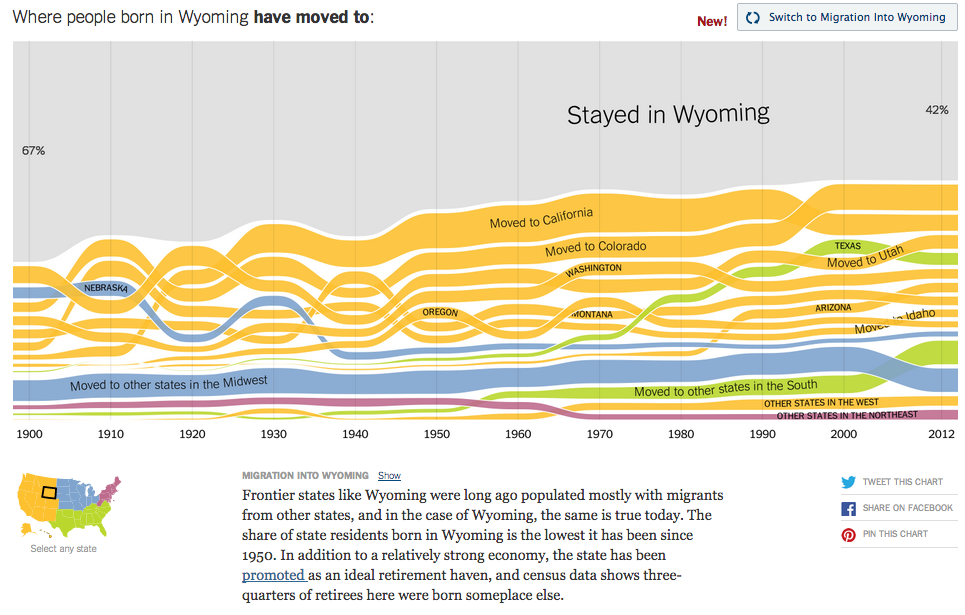 Do you still live in the state in which you were born? The New York Times data team mapped out Americans’ moving patterns from 1900 to present, and the results are fascinating to play around with. You can see where people living in each state were born, and to what states people move from others. The ribbons of data, pulled from the U.S. Census, are color-coded by region and clearly display migration patterns over time.

The Oxford Dictionaries’ 2013 word of the year was “selfie,” and for good reason: usage of the word in the English language increased by 17,000% from 2012 to 2013 alone. Now that the term and concept are an integral part of modern discourse, it’s interesting to examine the phenomena from a data perspective. Selfie City, a detailed multi-component visual exploration of 3,200 selfies from five major cities around the world, offers a close look at the demographics and trends of selfies. The team behind the project collected and filtered the data using Instagram and Mechanical Turk. Explore the differences between selfies snapped in, say, New York and Berlin, as well as those between men and women across the world. 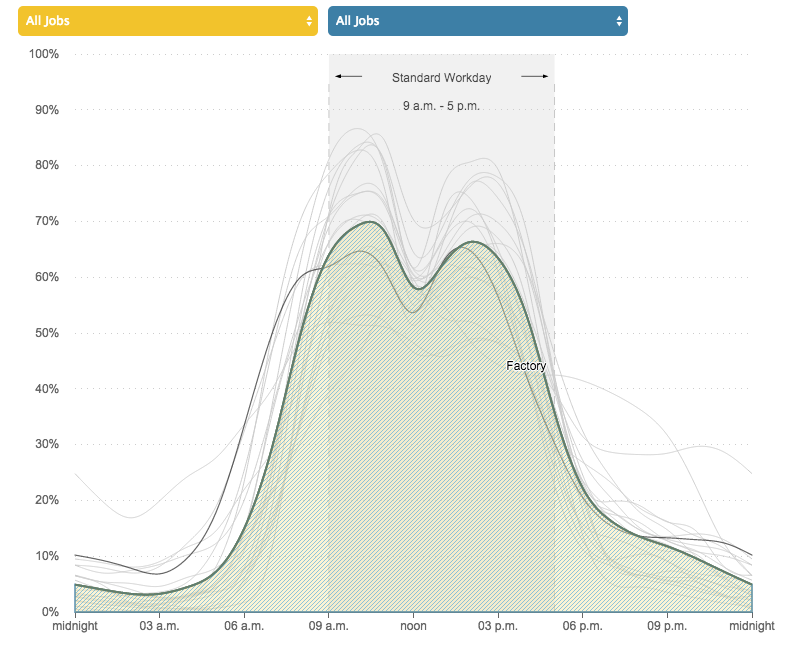 Want to see how the length of your average workday stacks up against the workdays of others? NPR tapped into American Time Use Survey data to ascertain the share of workers in a wide range of industries who are at work at any given time. The chart overlays the traditional 9 AM-5 PM standard over the graph for a reference point, helping you draw interesting conclusions. 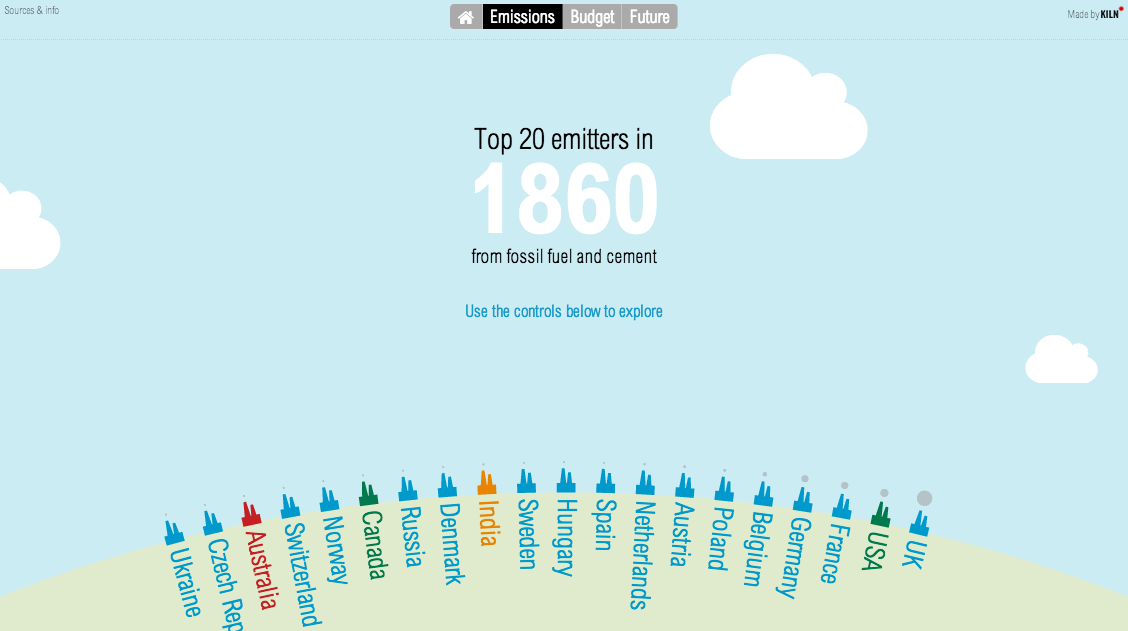 Screenshot via The Guardian

This data visualization, based on data from the World Resource Institute’s Climate Analysis Indicators Tool and the Intergovernmental Panel on Climate Change, shows how national CO₂ emissions have transformed over the last 150 years and what the future might hold. Explore emissions by country for a range of different scenarios.

Knowledge is power, but in order to make your knowledge of data actually powerful, you have to be able to display your findings in a coherent, compelling way. That’s where data visualization comes into play. With more data available than ever before, opportunities are both rich and plentiful for you to explore how to convey ideas behind data effectively.

Other posts by Allison Stadd

← How You Can Stand Out in Your Next Web Developer Interview

Remind Your Friend to Take a Break with this Python Program →